Chance placement of earth beneath stone,

shelves of rock and ancient soil,

the breathing of the trees

on the cold air

grounded in the sky’s grey-layered

remnants of a closing day.

How had I not seen the minute red berries

and the blue stars

in moss and leaf litter,

In my bed was I

of a woodland pool,

Concert concert-o
wild with summer hope,
with faded sunlight,
shadows, all,
longing for something
not yet lost,
trans-lu-cent memories
of a past not yet past,
caught in cobwebs
and baskets of shells
under the stairs in a Stukey cottage.

Hexfoils on old walls,
in dark-lit corners;
perfect daisy wheels,
scratchings and scribblings
and sailing ships floating
out into hollow space,
a place on the edge of time
where thy-me stands still.

I gather up my shoes
So they are not taken by the sea
I find my heart, once given freely,
weighted down by sea glass,
anchoring me to earth and sky.

And the night rocks me safe
in the hollow of her hands. 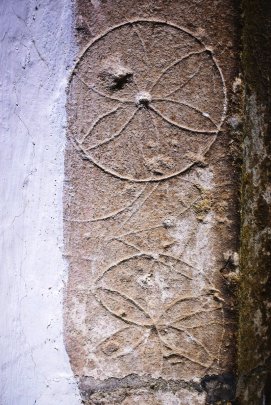 deep in my chest.

I expand and reappear

She watches as he hollows out the pumpkin,

scooping out the seeds and

So he empties her,

ripping at her woven secrets

to reveal her bared flesh.

And she is laid out,

and gasps for air. 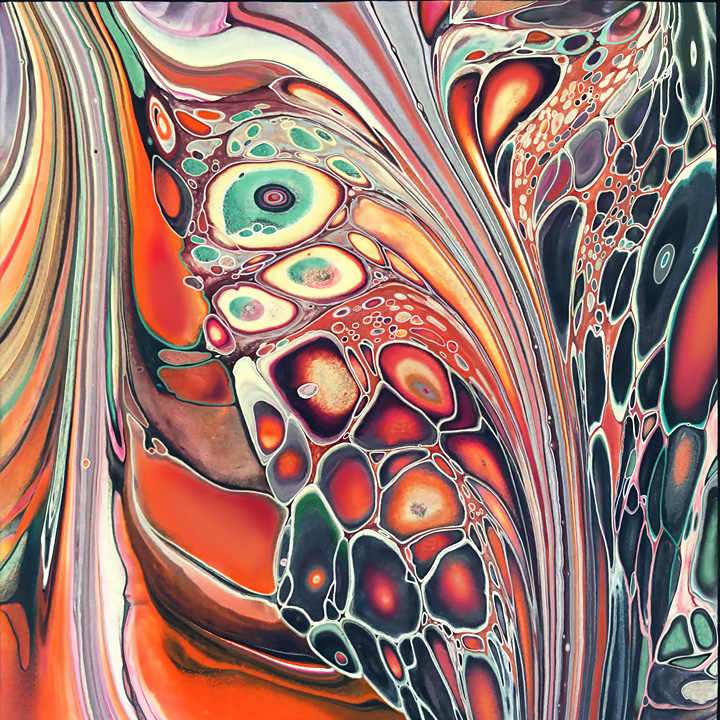 I felt I had fallen from the bottom of the biting ocean floor into the night sky, surrounded by yellow angels, their eyes glittering like silver-sided leaves below me, their mouths opening, popping ‘O’s and smiling wetly at me, and I tried to fall again, waving my wing-like legs and kicking my use-less arms. The air rushed past me, threading my eyes and lips on a string of grey-blue music, and I cried so hard! So hard were my tears that they turned inward and exploded in heavy, aching-green waves and flushed inside my stomach and my breast, and my cheeks lit up from inside and still I struggled until the angels caught my hair and twisted it like rope around their waists, pulling me up, right up into the very heart of being, where light poured over me, until even my fingers and my feet glowed orange…

William Blake, The Ancient of Days, from The First Book of Urizen, 1794

and sunlight, fragmented over me;

the ebb and flow, the wave and ripple

of this death, this ending,

blown by other breaths.

not waving at all but drowning[1]

Listen to the wraiths of morning in Flanders fields of grey,

Can you hear The Royal Sussex who came and went away

And linger still in graves unknown amidst the furrow and the thorn.

But never flinched, duty done, these sons of Sussex bred and born.

100 years ago today, my great-great uncle Alfred Sidney Mercer – known as Sonny – died on the battlefront in Belgium.

Despite being underage (just 15) Sonny, from Farnham in Surrey, enlisted at either Aldershot or Guildford in early September 1915, and was assigned to the Royal Sussex Regiment. How did his parents feel? Did they give him their blessing, or did they only find out when it was too late to do much about it? And what of his siblings reactions? My grandfather Rev, named after a once-revered soldier-general, was next in age to Sonny; did he yearn to join up, too?

Sonny was placed in the 11th Service Battalion of the 1st South Downs (the Battalion having moved from Sussex to Aldershot in September 1915 and in October 1915 to Witley, south east of Aldershot and Farnham, whereby it came under command of the 116th Brigade in 39th Division).

The days (weeks, in reality) leading up to the 29th April 1918 were marked by constant, at times heavy – or as the 116th’s War Diary stated, “violent” – shelling. During the course of this day Sonny went missing, and was ultimately presumed dead. The one detail his official Army death record omitted was his age. Sonny was just 19 years old.

He is remembered at Tyne Cot Commonwealth War Graves Cemetery and Memorial to the Missing in Zonnebeke, Belgium  as one of these missing. A modest memorial also stands in Gostrey Meadow in Farnham which commemorates the fallen of Farnham during the Great War, with “A.S.Mercer” inscribed among the many other names.

As children I remember how we would stand on its plinth and trace with our fingers the engraved letters of his name. I did not know how I should feel. Pride? Grief? Some kind of innate understanding of what his loss meant to his parents and siblings, and to his wider family? I was a child, but I think I knew even then that I should, and wanted to, feel more than just a thrill of excitement that a family member’s name was on public display in the park where we so often played.

The Next of Kin Memorial Scroll WW1

Sonny was, and is, one unique piece in a myriad of puzzle pieces which make up a family, a country, and a collective humanity. While there never was, and never will be anything humane about war, about injury, about loss and grief, yet these experiences are each part of the tapestry which binds us together.

And I reflect upon a forever 19-year-old young man, missing, never found, sunk into the landscape of a green field, come battlefield, now pasture again, and I wonder which part of the ground is nourished by his body? Macabre? No more so than when I visit my mother’s grave, and appreciate the flowers blooming and thriving where her body lies.

We rise, we live, for either a moment or a seeming eternity, and we fall. Even we, even so.

Passchendaele Mud. Taken near Tyne Cot Cemetery, which commemorates almost 35,000 men whose remains are still in these fields. http://www.westernfrontphotography.com

deep in the fields I am grown in,

holding light and rain and warmth,

The poppies of Flanders fields

Books and movies have developed quite a symbiotic relationship over the years. According to Nielsen BookScan, almost all the top selling books over the last few years have had a connection to a film or TV adaption, and the majority of top-grossing films were based on “a pre-existing media property” such as novels, biographies, comics, and […]

via But in the book… — Siherlmór